"Light Avoidance for Simulated Explosive Removal"
Quickly agent! A nefarious villain has set a bomb inside of this vault. We're relying on you to neutralize this threat as quickly as you can:


And agent – be sure to watch that timer!

Operation of the L.A.S.E.R. Training Device

In the example the sequence is 7-3-9. Turn the dial in the direction of the > arrow until you hit the number 1. For each number in the code, switch the direction the vault dial is turning and turn until reaching the correct number. After reaching the final number, simply switch directions one last time and spin the dial to complete the unlocking sequence.

Success will be indicated by the appearance of exclamation points !!!
Here are several pictures illustrating how the illuminated buttons change after being pressed:
There are two ways to lose a life.  The first is by pushing a button that is not illuminated.  The second is by breaking a laser beam. More lasers illuminate as the player presses more correct buttons.
A death indicator becomes illuminated when the third life is lost, signaling that the player has failed.  Following this indication, an evil laugh sound effect plays through the headphones and the game returns to the starting state.

If the player pushes the sixteenth button with time and life still remaining, they successfully have defused the bomb!  The player is rewarded with a short audio cue of the classic James Bond theme signaling their victory, after which the game returns to the starting state. 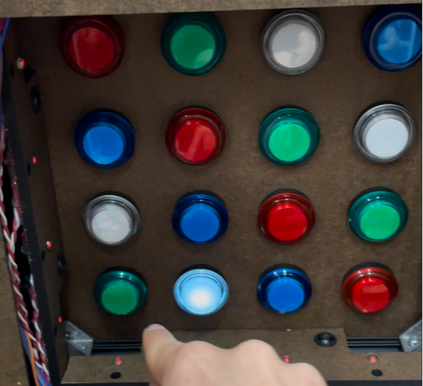 Note: The sixteenth (and final) button press is particularly challenging! Can you see why?
Here is a video demonstrating the game being played to completion: